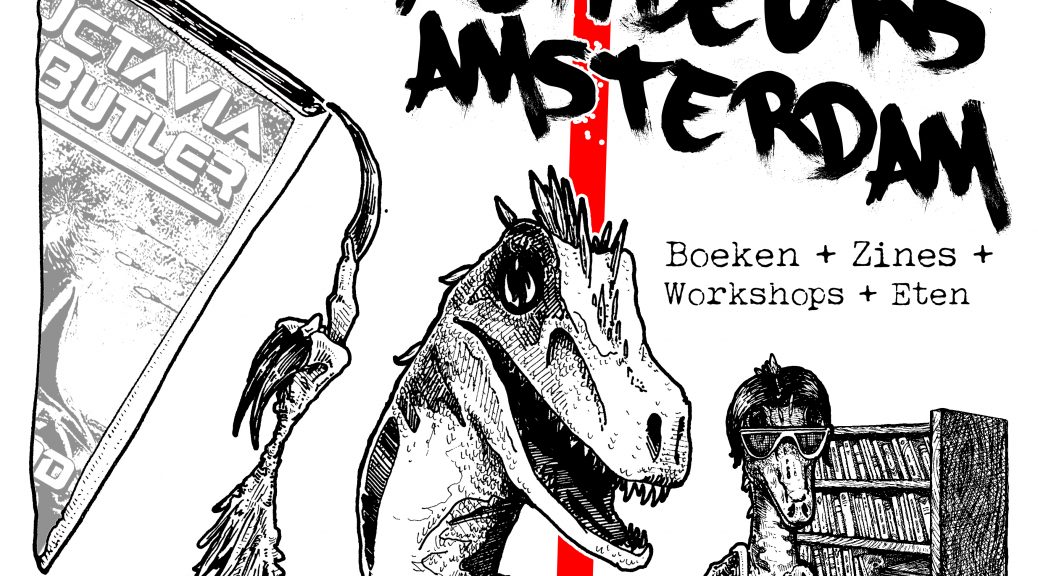 On November 2nd 2019 the third annual Anarchist Book Fair in Amsterdam will be organized at the Dokhuis. There will be stands from all the anarchist distro’s and bookshops in the Netherlands and surrounding areas!

The anarchist book fair is a place to encounter new ideas, exchange experiences with comrades and connect to different struggles around the world. Anarchist bookfairs are an important part of building infrastructural projects that will support us in our struggles. Come extend your network and to be among fellow anarchists.

Let’s learn how to destroy the ecocidal, patriarchal and colonial capitalist systems that dominate the world. Knowledge is power after all! Are you looking for comrades? Come to the Anarchist Bookfair in Amsterdam!

Are you looking for anarchist books and zines? We’ll have even more: clothing, buttons, publishers, distro’s, workshops, talks and vegan food! Come check us out!

Want to help out? We’re still looking for people who want to help out with the festival itself. Excited? Please send us an email! 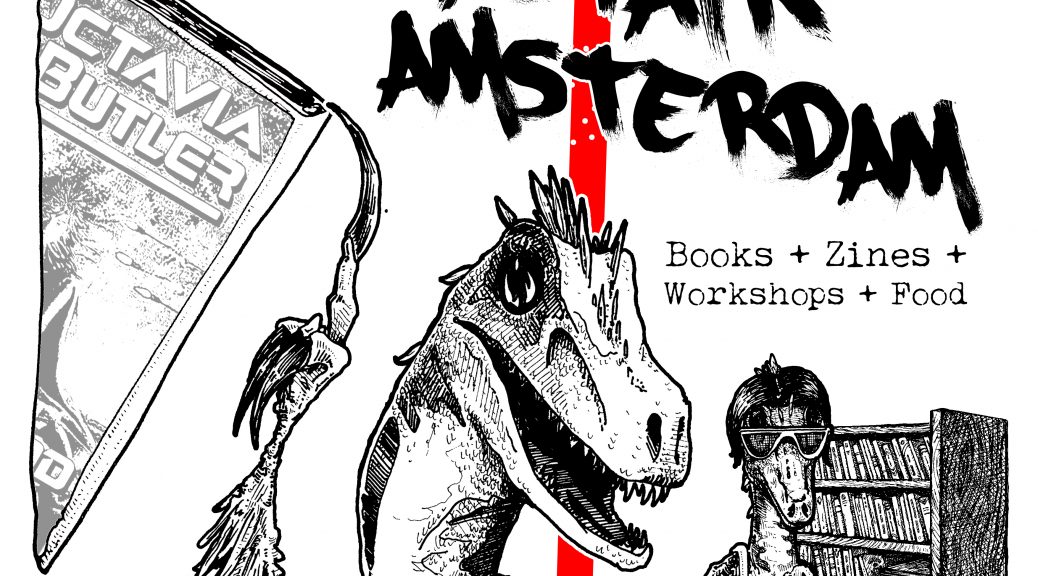 The Anarchist Book Fair Amsterdam will be organized in November 2019. This is the 3rd year in a row that we have organized this anual book fair. The first two years were so succesful that we had a taste for more. So this year you can come to the Dokhuis again for all your anarchist books, zines, stickers, posters, buttons, clothing and much more!

The specific date still has to be confirmed, but we are going to organize it at the Dokhuis in November. Keep an eye on our website and facebook for updates. As soon as we have confirmed the date we will let you know there.

Do you want to run a stand, give a workshop or help out at the book fair? Let us know! 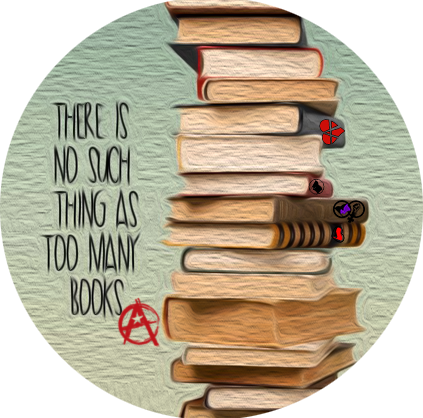 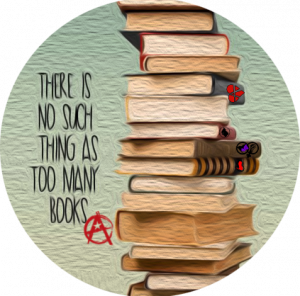 The Anarchist Bookfair Amsterdam 2018 is coming up soon! In the last weeks we have posted the stands that have confirmed in our blog, but a few of those slipped through the cracks (or didn’t have a description to add..). We also have quite a full program of workshops and talks going on and even dinner and music afterwards!

Check out all the stands that will be there!

And check the program to see if you want to join a workshop or talk!

Hope to see you there!

P.S. could you be considerate of our neighbours and put your bikes in the bikeracks?

P.P.S. We would like to ask you to refrain from bringing your dogs to the Anarchist Book Fair. There will be lots of fragile table setups, there will be children present and we expect there to be very little space left with all the people coming and the almost 50 metres worth of books and pamphlets. A very busy environment that might not be ideal for a dog.

The Anarchist Group Nijmegen (AGN) is a group of people who came together to study and discuss anarchist/libertarian-socialist theory and practice. We try to learn from this, give tendencies and feelings a place and to see how this theory could help in our own practice, dealing with situations and forming vision. This with the aim of bettering our own organisational structures and the way we work together.

END_OF_DOCUMENT_TOKEN_TO_BE_REPLACED

For the liberation of humans.
For equality and solidarity
Against capitalism, nationalism, discrimination and repression.
For freedom!

“The freedom of the printing press is only garuanteed for those who own one themselves.”

This adage it not relevant anymore today, because the possession of a computer and printer is enough to publish texts yourselves. These developments in ‘printing on demand’ is what has led to the start of Kelderuitgeverij.

We dig out non-available texts from the archives of history. Texts that should not be forgotten, memories of and monuments for people who devoted their lives to create a more just society.

Kelderuitgeverij re-designs these texts, puts a new cover on them and makes them available again. Everytime there is only a limited edition that is prepared with the utmost care for the quality of content and form.

The debate about refugees makes emotions rise high. Most of the attention is the debate goes to the refugees who have newly arrived in The Netherlands. But refugeechildren who have been here for a longer period of time suffer in silence. Geen Kind aan de Kant! focusses on these children.

GEEN KIND AAN DE KANT works with refugee children, their parents and multiple other organisations to:

On our website you can find more information about the problems we fight against and how we do that: geenkindaandekant.nl 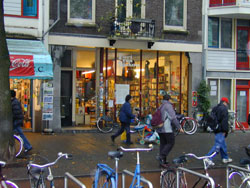 Bookshop “het Fort van Sjakoo” is since 1977 situated in the center of Amsterdam. At first in a squatted house on the site of a planned highway through the inner-city and since 1988 legalized.

The bookshop is run by a collective of 10 volunteers. We are there to provide you with information ranging from the latest news, background info and history. We have a special focus for foreign publications, music and magazines. Come and visit us. If you’re looking for something special we can try to get it for you.

We do this by campaigning on multinational corporations and their national and international influence spheres and control tools. At the same time we promote sustainable alternatives. Currently ASEED Europe focuses on issues related to the global food chain: the decline of biodiversity in agriculture and the availability of seeds, genetic engineering and power concentration by global agro/biotech giants. Our general agriculture campaign goal is to promote food sovereignty. In the recent past we have been campaining on the massive production and imports of soy, climate change and international financial and trade institutions.

ASEED was established by young engaged people in 1991 in response to the UNCED Earth Summit proceedings in Rio de Janeiro and aimed to forge alliances among young people committed to social and environmental justice. Since 1992, the ASEED decentralised network grew and regional “hubs” were created in Europe, Asia, North America, Africa, Latin America and Japan. Each hub had its own level of activity, linking youth groups and individuals in their region. By now each hub has developed in its own way, working independently from eachother.

ASEED Europe works with about 6 people in the interactive office in Amsterdam, and together with many contacts in the rest of Europe and abroad on the following objectives:

More about ASEEDs goals you can read in our Mission Statement. There is as well a page with official information about the organisation.

The Vrije Bond (Free Union) is a group of people who are trying to build a different society: a society without hierarchies, without oppression and without exploitation of humans, animals and the environment; an anarchist society in which we deal with each other on a basis of equality. The members of the Vrije Bond are all working in their own way, in their own city, neighborhood, job or action group, to create such a society. They are doing this through direct action, by organizing discussions, writing articles or supplying information. The Vrije Bond serves as a platform to meet each other, to exchange experiences, to develop theory and strategies, but also to organize activities and to support them.

A better world, that’s what anarchism stands for: a world without domination and exploitation, based on cooperation and solidarity. A world wherein everybody can decide for him or herself how to shape their lives, based on the principle of equality and the freedom of speech and action. This is a fantastic idea, but it’s not easy to build this world. For such changes we cannot rely on representative democracy. The revolution that is necessary for such a world can only be reached through cooperation and organization from the bottom up. That’s why it is important that we anarchists organize ourselves, because together we stand strong.

The Vrije Bond is such a form of cooperation: an anarchist self-organization. This means that we work together when necessary but that affiliated groups and individuals keep their autonomy. By having regular (open) meetings, direct actions, and campaigns, a solidarity fund, a website and the magazine ‘Buiten de Orde’ the Vrije Bond as an organizational structure wants to support and strengthen the anarchist movement.

The Vrije Bond publishes the quarterly magazine ‘Buiten de Orde’ (Outside the Order). It’s filled with information, interviews, and discussions about, amongst others, anarchism, self-management, workers’ struggles, human rights, anti-fascism, anti-militarism, environmental actions, resistance and independent culture. The magazine is free for members of the Vrije Bond, and for sale for everyone else.

Another important activity of the Vrije Bond is the Solidarity Fund. Through this fund the members of the Vrije Bond support each other’s actions and activities, such as (direct) actions by the groups within the Vrije Bond, such as picket lines, civilian inspections and action camps. Initiatives such as an anarchist library or info shop are also supported. Sister organizations abroad or non-members can also make use of this fund.

The Vrije Bond is growing, so join now! Sign up and help us building a strong anarchist movement in the Netherlands and Belgium.